skip to main | skip to sidebar

Christmas morning can be a challenging time for a single Jewish guy who wants to go someplace for breakfast. Every year I get in my car and drive toward Pasadena.  Very few places are open, but I always seem to find one.
One year, the bakery next to Mi Piaci on Colorado was open. Another year, it was Robin's in Hastings Ranch. It seems to vary from year to year, and I can't count on any place to be open from one year to the next.
Several years ago, as I made my way into Old Town on Christmas morning, I noticed that Ruby's Diner at the corner of Green and Fair Oaks was open. Ruby's was a '50s-style diner that had great food and waiters and waitresses dressed in 50s-style outfits. It also had an electric train that went around on an elevated track above the dining area. (Ruby’s has long since left Pasadena, but can still be found in some other Southern California locations.)
Sometimes my swing-dancing friends, and I would go there in the evening after a dance at Pasadena Ballroom Dance Association and dance in the aisles between the tables to the 50s music they played on the speaker system. I was really happy that Ruby's was open that Christmas morning.
Upon arriving, I realized that I needed to buy an LA Times to read as I ate, but decided I'd wait until after I ordered my meal. As I entered, a young woman greeted me and asked me if I was there for breakfast. I thought this was a rather odd question. It was around 8:00 a.m., so what else would I be doing walking into a restaurant?
I noticed that the waiters and waitresses were not wearing their usual red and white Ruby's outfits. Instead they were wearing blue jeans and flannel shirts. I thought, "That's funny, but it is Christmas. Maybe they just thought they'd let them wear regular clothes."
I was taken to a booth, and I sat down waiting for someone to bring me coffee and a menu and take my order. As I waited, I noticed that instead of the usual salt and pepper shakers on the table, there were those little paper envelopes. I also noticed that the utensils were plastic. I thought, "Well, it's Christmas. I guess they didn't want to bring in a full crew of dishwashers and table bussers."
I sat for quite a while without getting a menu or being offered a cup of coffee. I was becoming a little impatient, when suddenly two young waitresses appeared at my table. One had a pot of coffee and the other had a rectangular styrofoam plate containing scrambled eggs, bacon, hash browns, and toast, which she began to place in front of me.
"What's this?" I asked.
"It's breakfast," one of them said in a tone that suggested the answer should have been obvious.
"But I didn't order this," I said.
Just then a lightbulb went on in my head.
"Is this a free breakfast for the homeless?" I asked.
"Yes," she said.
"Oh," I said as I thought about sliding down under the table from embarrassment,
"I can't eat this. I didn't realize...  There’s no sign or anything out front…"
"Don't worry about it," she said, "We have enough food to feed 500 people and only 50 have shown up. We're just going to have to throw it out."
So reluctantly, I began to eat my free Christmas breakfast. I looked around sheepishly at the other diners. There were a few homeless-looking people, and a few large tables of what appeared to be special-needs patients.
I had to eat my breakfast without the company of a newspaper because, you see, I felt so guilty for being there, I didn't have the nerve to show I had disposable income by getting up and spending a quarter on the LA Times.
After I was done, I went over and offered to pay for my food or to make a donation.
The waitress said, "There's no way you can. We don't have registers working, and all the food's been donated and paid for. We're just going to have to send all the leftovers to the park where they're serving lunch, and there will be way too much food."
I just shook my head and rolled my eyes, still very embarrassed. At least, as they say, I got a story out of it! 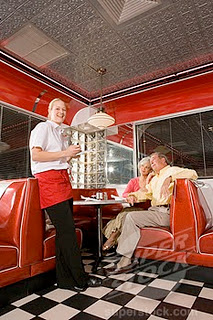 It wouldn't be Christmas without this story.

Thanks, Karin. You inspired the tradition!

All images and content on this blog are subject to copyright.